I found it surprising that many people that works with Java everyday doesn’t know that there are debugging options that go beyond clicking the “debug” button in your IDE.

You can just attach your IDE to a running application (which has been runned for debug as we’ll see later), or you can even debug it from command line. And the application you debug can even be be in a different machine.

The way it works is basically the following. When you compile a program, the .class files get debug information within them, like line numbers or local variables that are made accessible to others who want to access this information. You can then run the program in debug mode passing the following options to your java program execution(you can of course run any java program like this, including mvn goals, appllication servers, etc)

(you can also use -agentlib:jdwp instead of -Xrunjdwp in latest Java versions)

This line basically says: Run this program in debug mode, use the jdwp protocol, with a socket that listens to port 4000 and waits for connections to continue.

The jdwp protocol is a communication protocol used by the Java application to receive and issue commands and reply to them.

For example, you can connect to this port when the application is running an issue commands like “print variablex” to know the value of a variable, “stop at x” to set a breakpoint, etc. The application issues notification commands like “breakpoint reached”.
The truth is that the protocol is a little more complex than this, but this is enough to know to illustriate the point.

With the previous said, we can see that it would be even possible to debug an application with the use of Telnet! (we'll see later)

Well, enough theory. Let’s see an example Any simple example will do. We’ll make a simple program that takes two parameters from command line and prints the sum. The program won’t be well designed (In the sense that will include some useless temp variables, no validations, etc) but will do to illustrate the example.

So we compile it: javac -g Sum.java (the g option adds extra debug info to the class. Like local variable names)
And we run it in debug mode: java -Xdebug -agentlib:jdwp=transport=dt_socket,address=4000,server=y,suspend=y Sum 3 4

We will use the jdb command line debugger that comes with java. But first let’s try this. Run the following (you must run the second line fast after the telnet session starts)

That is the handshake to initiate the communication. You now have a debugging session with Telnet !

Ok, that was only to show, you (or i) would have to know the details of the jdwp protocol to use it. Let’s use instead jdb to debug our application. execute the following:

you’ll get some output like
Initializing jdb ...
>
VM Started: No frames on the current call stack

That’s it, you have a debug session started. Now the interesting. Execute the following in your jdb session:

stop at Sum:6 You now have a breakpoint on line 6. execute run on the session, and the program will run until that breakpoint. you’ll get the output


Now let’s see the value of our variables: run the following commands (one at a time) on the jdb session and see the results.

This is pretty cool stuff. You can debug your program from command line.

Of course if you have the opportunity to use an IDE like Eclipse you should take the advantage of it and still applying what you’ve learnt. So let’s do this.

You need to have the source code of the running application open in your eclipse as a eclipse project for this
Go to the step when you ran the program in debug mode. and run it.

Now go to your eclipse, go to the menu and select RUN -> DEBUG CONFIGURATIONS

In the left panel go to Java Remote Applications, and click new there.

Then select your project, write 4000 in the Port field, and click debug: 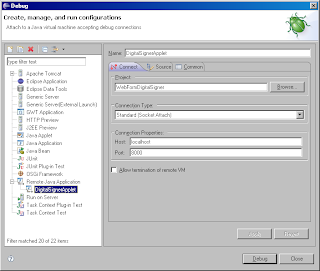 That’s it. you have attached your eclipse to the debugging program, now you can put breakpoints, do variable watches, and evaluate expressions from Eclipse.

That’s it. i hope this small article has helped you to understand a little better how the debugging of an application works and how you can debug and application that runs somewhere else.

Carlo
Email ThisBlogThis!Share to TwitterShare to FacebookShare to Pinterest
Posted by Unknown at 6:25 AM

This also allows debugging of an applet running live in a browser; invaluable when the applet and the browsers JavaScript call each other.

For some reason on windows "jdb -attach 4000" does not work. But when I do "jdb -connect com.sun.jdi.SocketAttach:port=4000" it works.

Also, when I attach eclipse it says "Source not found". :(

Hi Englebart, that sounds good. I haven't tried that, as i haven't work with applets in ages but as long as you can run the VM in debug mode there should not be problems with that.

Andriy. you need the source code of course. You can create an empty project in eclipse, and paste in it the source code files(with the correct package structure of course). Then use this project to attach to the debugger

Thank you for your great article! I didn't imagine that it was so simple!

Thanks a lot.
- Dhiraj

Thanks for sharing this.
For the command debugging part, the telnet and JDWP-Handshake part is not working for me.
using
jdb Sum 3 4
would work in java8. :)